Pathogen is comprised of two separate tempo synchronized sections. The first section is a burst generator for trigger signals, with length, "physics" based density and its own clock divider/multiplier.

The second section is a four output pattern generator with eight modes:

1. Counter - Clock/measure/beat counter mode. PARAM selects one of 32 different counting patterns. The patterns are arranged in eight groups of four, each group of four has a different time signature. Starting from 2 through to 9. Use this mode to do boring predictable 2/4,3/4, 4/4 stuff OR go wild and spice up sequences, extend notes and clock sequencers in odd but super cool ways.

3. Arrhythmia - Mathematically (and deliberately) messed up euclidean rhythms - each of the 4 outputs on a cycle that never quite align but still seem to work. There are 32 of them - PARAM selects a patch from 1 to 32. Each of the 32 patterns has an alternate pattern that is activated when a RESET signal is received. A subsequent RESET signal will revert back to the original pattern. The 32nd pattern has a special twist - each time a RESET is received a new rhythmically awkward pattern will be generated.

4. Basic Drum Patterns - Some times you just need a basic drum pattern to noodle or perform over. Pathogen delivers! 32 x basic patterns, each 16 steps in length. PARAM selects which rhythm and RESET input will do what you would expect (it goes back to the start of the pattern duh!).

5. Random (1 of 4) - A random pattern of 1 to 32 steps where ONLY one of the four outputs can be active at a time. PARAM sets the number of steps from 1 to 32. Each time a RESET is received a whole new random sequence is generated.

6. Random (4 of 4) - Kinda like the previous algorithm except any of the outputs can be active at a time. PARAM sets the

number of steps from 1 to 32. Each time a RESET is received a whole new random sequence is generated.

8. Probability (4 of 4) - Again, just like the previous algorithm EXCEPT any of the four outputs can be active.

Pathogen has jumpers on the back to configure the clock divider/multiplier range and also to turn the output of the pattern generator from gate signals into triggers/"pulses". The optional PG expander brings these controls to the front of your rack with dedicated switches in 2HP. 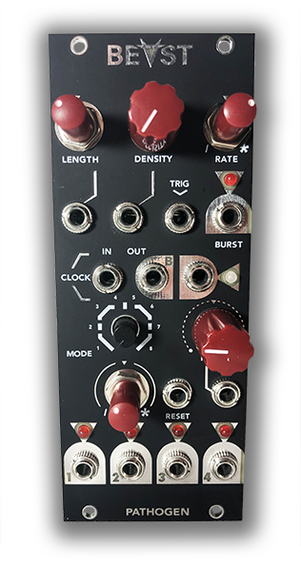 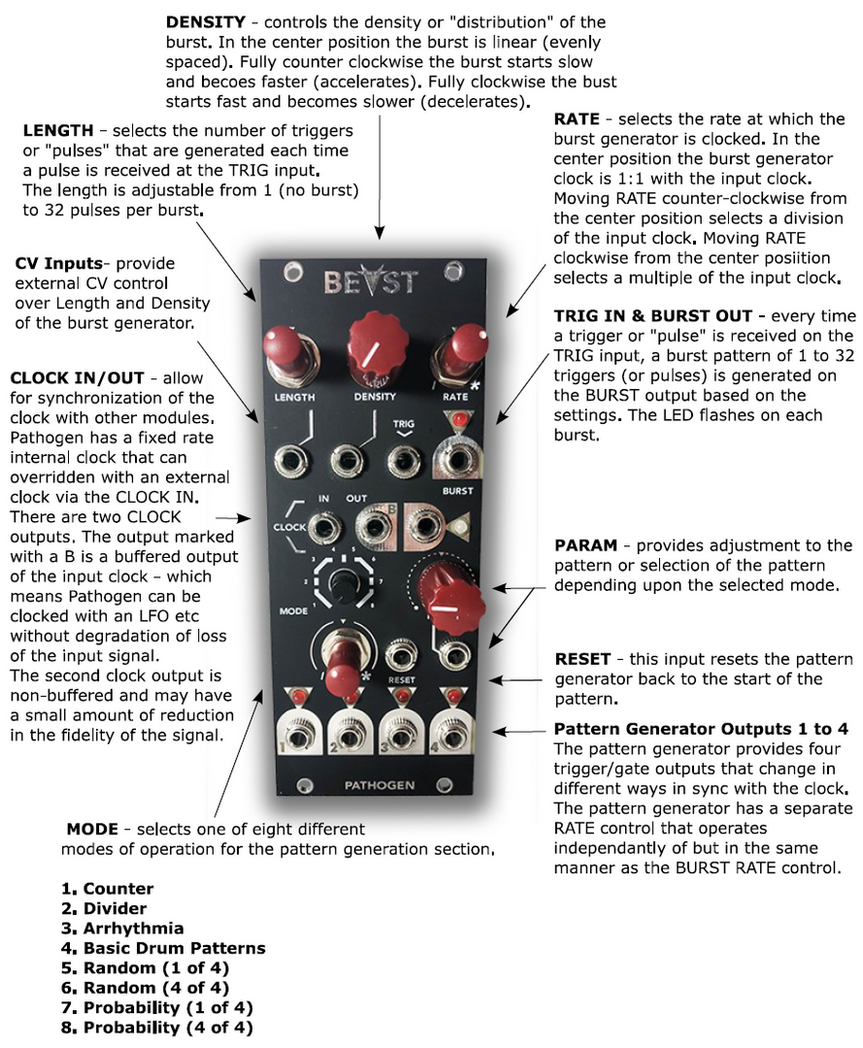